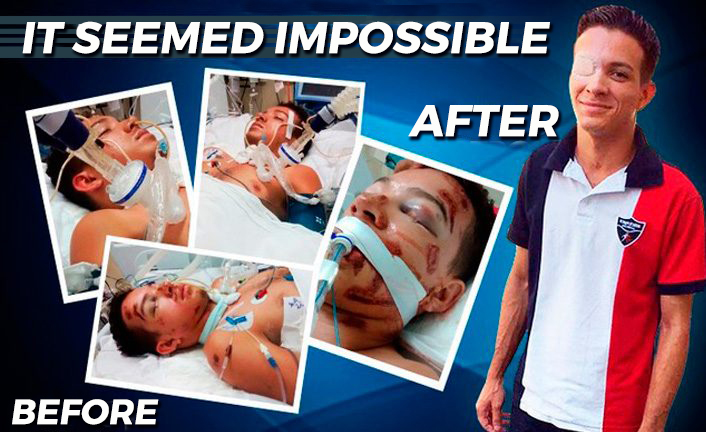 My name is Marcus. I was born in the favela of Mandela, located in the city of Rio de Janeiro. I was an outgoing child; I loved to play ball and fly kites. My childhood was normal, like any other child. My mother did everything in her power to raise my 3 brothers and me. Though I was a happy child, with a well-structured family, I ended up going down the wrong path.

After making new friends that were involved with drug trafficking, I began, at an early age, to attend parties that lasted well into the morning. Everything I did was in search of something to fill the unexplainable void I had inside. Drugs began to catch my attention, since alcohol wasn’t enough for me anymore. Then, to keep up with my new status, I became involved with several women.

All these things took a negative effect on my studies; I was even expelled from school for fighting. I felt the need to take out all the anger I had built up inside on everyone and everything. As if all these problems weren’t enough, I was constantly being chased by the police in the favela.

My friend and I also produced homemade bombs that sounded just like grenades. One day, luck was not in my favor. The bomb exploded in my friend’s hand and struck my right eye, causing me to become blind. Still, this was not my rock bottom.

After my accident, I suffered for another year. I became more violent, angrier; I committed acts of vandalism with more intensity.

Does this seem insignificant? Well, approximately 1 year later, I had another accident. I was struck by a car and thrown a distance of 20 meters. This incident caused several complications in my body: a perforated rib, dorsal fractures, head injury, pneumothorax, pulmonary embolism and a collapsed lung. According to the doctors, I did not have much time to live because of the consequences the accident had on my body. This is, if I survived. However, it would be unavoidable, thanks to the brain clot that developed. But, because God had plans for my life, an ambulance appeared out of nowhere. My family and friends, astonished, screamed for help. I was rushed to Salgado Filho Municipal Hospital, in the district of Méier, Rio de Janeiro, where I went into a deep coma for about 2 weeks. Much to the amazement of the medical staff, I only remained hospitalized for one month. With all my injuries, not even the doctors believed in my improvement.

This was my rock bottom. I couldn’t stand all the suffering in my life. Besides, I had just received another chance at life. Status, fame, women, drugs, alcohol… from that day on, I felt disgusted by the life I was living.
So, I looked for help. I was so determined to change my life that no one had to call me. I went by myself. I DIDN’T CARE ABOUT WHAT I WOULD LOSE. That’s when I was introduced to the work of the Universal Church. Even though I did not know what the Holy Spirit was, I wanted Him more than anything else. I didn’t have any other purpose or goal.

Later, I was invited to the Youth Group, where I met people that didn’t criticize or condemn me for who I was. Instead, they were always willing to help and received me with open arms. The rage that consumed me, no longer exists. The hatred I harbored turned into the love for souls, for those suffering. My relationship with my family was restored. Today, I can say that I am a man of God and I learned that life is worth living. My life was transformed, and now my will is to help others.