MICHAEL Schumacher is running up care bill at £115,000 a week, with the total costs for the paralysed F1 racing legend hitting £12million, according to a new report. 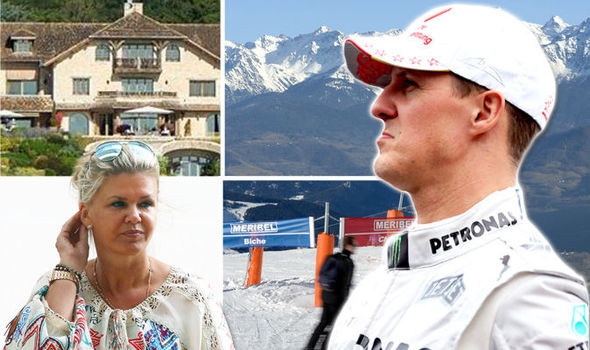 The UK website Christian Today reported on the health of the stricken F1 ace who has been under constant care since nearly killing himself in a low-speed ski accident in Meribel, France in 2013.

It says he remains under the care of a 15-strong team of physicians, nurses and medical technologists at his custom-built mansion home on the shores of Lake Geneva in Switzerland.

But his manager said he is slowly showing signs of improvement.

The report speculates Schumacher’s fortune may be dwindling as a result of his condition, but this looks unlikely.

At the time of his accident he was worth more than £500million and loyal sponsors including Mercedes have stuck by him. But wife Corinna has sold off his private jet and a holiday home they owned in Norway.

Schumacher once described his wife as his “guardian angel” and has been regularly pictured alongside her husband over the 20 years of their marriage.

The website said his wife has taken charge of his business affairs though questioned whether his $800million net worth could buy his recovery.

It added: “The real score on Schumacher’s health is of utmost importance. The money they have could be insufficient if recovery is not progressing.

“As far as Schumacher’s real state is concerned, there are alleged reports that he now only weighs 45 kilograms and is unable to walk on his own.”

The words of the Lord Jesus teach us that one’s first concern must be to act with justice, righteousness and to love our neighbours , then the Lord Himself will be in charge of providing us with our necessities.

Schumacher used his talent to accumulate his fortune, but all that money were unable to buy his healing:  “With men this is impossible, but with God all things are possible.”(Matthew 19:26)