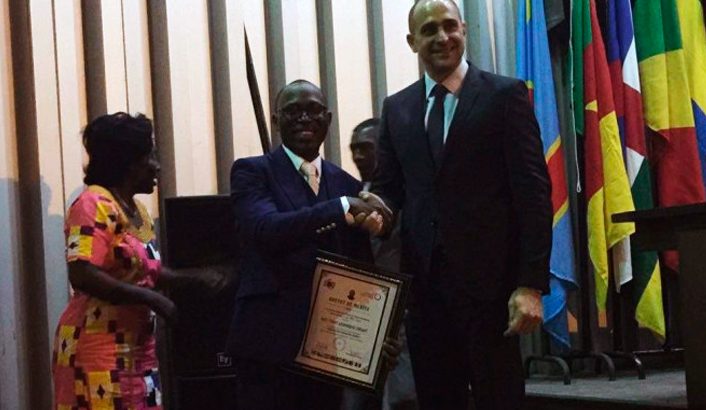 On the 7thof April, Bishop Edir Macedo and Pastor Tonny Asongkeng Cresant received the Goodwill Ambassador Award in the capital of Kinshasa, in the Democratic Republic of Congo. Medals and diplomas were awarded in honor of the social outreach work carried out in the country, whose main purpose is aimed to help the suffering population. In 2014, churches of various denominations were persecuted and some closed down. After the authorities learned about the Universal’s social outreach work, the Church stopped receiving threats and was honored with this award.

The ceremony took place at the Foreign Ministry of Congo and brought together local authorities, including National Economy Minister Modeste Bahati Lukwebo and Canada’s ambassador to Kinshasa, Nicolas Simard.

The award was given by the International de la Francophonie (FIFEF) organization to Pastor Tonny. This event happens every year and pays homage to the institutions or citizens who are an example in society.

The work of the Universal Church

In 2002, the Universal Church arrived in the Democratic Republic of Congo and, through the outreach work carried out in the community, volunteers distribute clothes and food in the streets, provide assistance to people with mental illness and leprosy, visit asylums, prisons, hospitals and make blood donations.

“Many people were prejudice towards the Universal, but when they saw that we were serious about this work, they understood and started showing support,” explained Pastor Tonny.

And he added: “It is wonderful to see how God has honored the work of the Universal despite all the difficulties we encounter here.”

The Democratic Republic of Congo

Also known as Congo-Kinshasa, it has a population of 78,736,153 inhabitants. It is the second-largest country in Africa by area and the fourth most-populated nation. It suffers many social problems and civil wars. According to the World Bank, the poverty rate is 63.9%, and life expectancy is less than 59 years.

Data released by UN organizations showed that 1.7 million people in Congo-Kinshasa were forced to leave their homes in 2017. In total, the number of people who fled was 4.21 million. This crisis surpasses the civil conflicts in Iraq, Syria and Yemen.