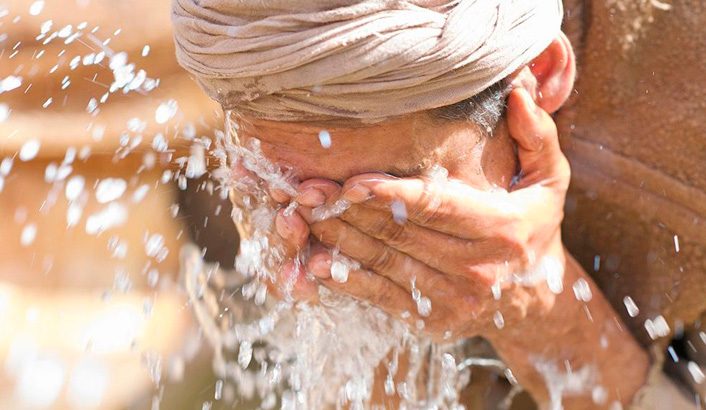 That’s right. The voice of faith pushes towards sacrifice in obedience to the Word of God. This is exactly what happened with the blind man. At first, he did not know Jesus or that He was there looking at him. The evangelist John does not record any manifestation of faith from the blind man. This is to say, the faith of the blind man was born when, moved by a need and awakened by unclean clay in his eyes, he heeded the command of the Lord Jesus to go wash himself in the pool of Siloam;

However, his faith had to be accompanied by the sacrifice of obedience. He walked down into the valley, with great difficulty, feeling around as he went downhill.

The Lord Jesus knew his physical condition. Yet, He sent him down into the valley to the pool. The sacrifice to obey the Voice of the Lord Jesus was the secret to awaken his faith.

Faith is awakened by sacrifice

In one way or another faith has to be awakened for a miracle to happen. The Lord Jesus knew the only way to change the complacency of the blind man was to awaken his faith through sacrifice. For this reason, the Lord gave him an “obligation”: get him to go to the most difficult place.

In the case of the hemorrhagic woman, she imposed a sacrifice of faith on herself. Of course, the Spirit of God inspired this initiative (Mark 5.25). Sacrificial faith is the exclusive work of the Holy Spirit. He convinces, He encourages sacrifice, He inspires and gives the courage to sacrifice. The task of the servants of God is to preach the Gospel, teach Scripture, and make people aware of the Promises of the Most High. The rest is the work of the Holy Spirit.

The gift of Faith

Acts 3 speaks of a lame man sitting at the door of the Temple begging for alms. He did not manifest the least bit of faith to be healed. Peter and John had to use the gift of faith to heal him.

Jesus heard that they had cast him out (of the synagogue); and when He had found him, He said to him, “Do you believe in the Son of God?” He answered and said, “Who is He, Lord, that I may believe in Him?” And Jesus said to him, “You have both seen Him and it is He who is talking with you.” John 9.35-37

Even after being healed, the blind man did not believe in Jesus as the Son of God. This is, as his Lord and Savior. The same happens with most Christians. They have been benefited by the miracles of the Lord Jesus, but still do not know Him personally. They “physically” continue in Christianity, but do not know the Lord personally. This is why they are weak in the faith. Until they receive the seal of the Holy Spirit, they will not know the God of the Bible. Also, they will remain far from the fullness of life with abundance.

Those who wait to believe in God to start believing in themselves will die waiting.

Biblical faith comes from the Spirit of Faith. It is a gift from God. This belief forces us to believe in our talent and potential. The Word of God is like a map to conquer by faith.