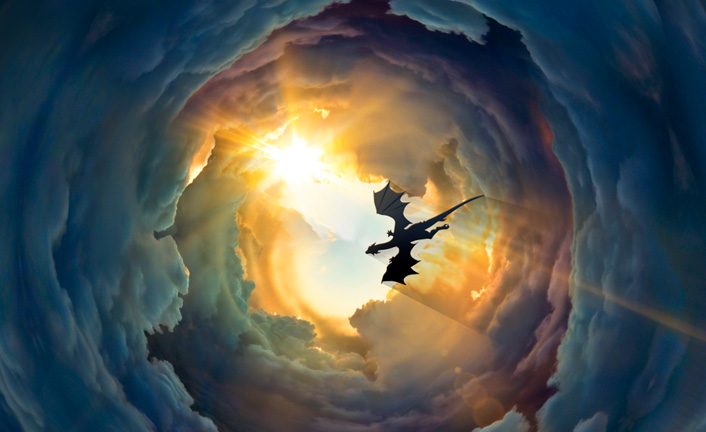 “How you are fallen from heaven,O Lucifer, son of the morning!How you are cut down to the ground,you who weakened the nations! For you have said in your heart:‘I will ascend into heaven, I will exalt my throne above the stars of God;I will also sit on the mount of the congregation On the farthest sides of the north;I will ascend above the heights of the clouds,I will be like the Most High.’Yet you shall be brought down to Sheol,to thelowest depths of the Pit.“Those who see you will gaze at you,and consider you, saying:‘Is this the man who made the earth tremble,who shook kingdoms,who made the world as a wildernessand destroyed its cities,who did not open the house of his prisoners?’“All the kings of the nations,all of them, sleep in glory,everyone in his own house;but you are cast out of your gravelike an abominable branch,like the garment of those who are slain,thrust through with a sword,who go down to the stones of the pit,like a corpse trodden underfoot. Isaiah 14.12-19

His tail drew a third of the stars of heaven and threw them to the earth… Revelation 12.4

And it grew up to the host of heaven; and it cast down some of the host and some of the stars to the ground, and trampled them. Daniel 8.10

All of the references above show us how Lucifer with his arrogance, pride, envy, and vanity wanted to occupy the place and be like the Most High.

Because of this, he led the rebellion that drew third of the angels, and some of which were from the Almighty’s army. We know how they ended up!

Therefore, Istarted to ponder: Isn’t the Almighty Omnipresent? Doesn’t He know everything because of His Omniscience? Isn’t the Lord Omnipotent? So why did He not take action immediately? An act of rebellion is not done from one day to another. It all has to be prepared, you have to find those who agree and plan in order for it to work.

I wonder: How long did Lucifer take to convince millions, perhaps billions or trillions of angels to join him? He must of had “good arguments” to convince celestial beings, who saw God, knew His power and Glory. This was not done overnight; I think it would have taken a lot of time. So, why did God not intervene early on? From the moment the first one joined him? Could a catastrophe have been avoided? Evil could have been eliminated from the beginning, before it spread throughout the heavens. Why wait? Why so long?

The Spirit shed His light and understanding: God did not create robots, He did not create beings that could not decide,instead He created them with the same capacity of man to make decisions as they pleased. And, this is why Heallowed Lucifer to work freely so those who were like him, and had the same ideas, pride and vanity, would be purged all at once, so that everything can be clean and would not be any stubble of evil in the heavens, and remain only those who really were faithful and God-fearing, who would honor Him not by imposition but freely and spontaneously, acknowledging His power, glory, and great love.

Once God saw that there was no one else who wanted to defile themselves with the deceit and lies of the devil, He expelled them immediately, indicating that He alone is the Lord Almighty.

This makes us understand what happens at the present time today within the church of the Lord Jesus, we see men who have the same spirit of Lucifer – pride, wickedness and vanity. They work hard to drag the most number of people to the same place they will end up: hell!

They do not have limits on their wickedness, lies, deceptions, words of irreverence, hatred, envy, they try to do the same as the devil did, occupy a place that does not belong to them and destroy those who only did them good. They have no scrupulous. Could God not finish with them in a blink of an eye? Isn’t the Most High seeing all their wickedness and what they do to pull the sheep out of the fold?

Yes, our God sees and is allowing all this to clean His House, Work, to take out all of those who live in disguise, who have personal goals and cover up their evil intentions. One day, and it will not be long, the Most High will rise to remove all these deceivers, and will bring what we, the born of the Spirit, look forward to with such eagerness: the Great Awakening on a global proportion, which will accelerate the coming of our Beloved and long-awaited Savior Jesus Christ.

Before these things, let us be vigilant, pray, and flee from the presence of evil. Do not listen to the words of envious rebels; fix your eyes only on the Author and Finisher of our faith!

Meditate on this verse, which clearly describes what we are living, seeing and hearing:

Little children, it is the last hour; and as you have heard that the Antichristis coming, even now many antichrists have come, by which we know that it is the last hour. They went out from us, but they were not of us; for if they had been of us, they would have continued with us; but they went out that they might be made manifest, that none of them were of us. 1John 2.18-19

May the mercy and goodness of the Lord our God never leave us, preserving us until the day of His return. Amen!