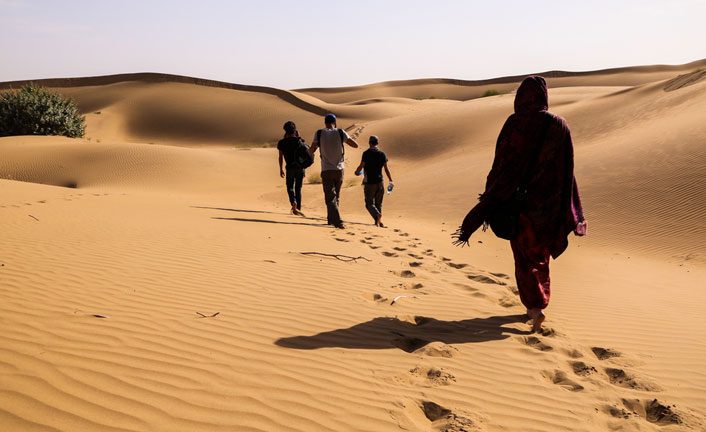 Israel crossed the Red Sea and was heading for the Promised Land. Mrs. Rebekah Kauffman, along with her three children, accompanied Mr. Benjamin Kauffman, according to Moses’ direction toward Canaan.

All of a sudden, she began to complain about everything.

“I can’t stand this life of pilgrimage through the desert…”

“We are walking to a land that neither of us knows, nor has anyone ever been there before…”

“Does this promised land even exist?”

“Every time the cloud moves from above the Tabernacle, we have to disassemble everything, pack up and continue our journey… I’ve had enough! I don’t want to live like this anymore!”

“Next time the cloud shows us a new direction, I’m not going anywhere…”

With a tone of voice that she had never used before, Mrs. Rebekah gave her husband an ultimatum:

“If you want to continue, then you’re going to go alone. I’ve come this far. I’m tired of walking in circles. When the cloud moves again, the children and I are going to stay right here!”

Mr. Kauffman thought this was the effects of “PMS” or a “moment of anger” and would soon pass, so he preferred to remain quiet.

It did not take long, and the cloud moved from above the Tabernacle. God’s wind blew, showing a new direction. It was time to pack up again and keep walking.

Then he heard Mrs. Rebecca yell:

“I’m not going! I’m tired of packing and unpacking. I’m tired and I don’t want to do this anymore. I’m staying here!”

Everyone took down their tents, packed their bags, and continued on their way to Canaan. It looked like a big procession. Many people and entire families passed by the Kauffman family’s front door.

Mr. Benjamin decided to support his wife’s decision and make her happy that day by staying with her. Mrs. Rebekah was delighted because, for the first time, her husband supported her decision.

All the people of Israel walked and disappeared into the desert, while the Kauffman family remained in the same place until evening.

The column of fire that warmed them and protected them from the intense cold of the desert had moved along with Moses and the people. So that night Mr. and Mrs. Kauffman hugged their three children tight, but felt a chill that froze them to the bone. It was terribly cold; they had never been so cold.

At dawn, Mrs. Rebekah asked her youngest son to fetch some water that flowed from the Rock to prepare the coffee. The boy took longer than usual, and returned with an empty pitcher, saying, “I couldn’t find water.”

Mrs. Rebekah then asked her middle son to fetch some manna for breakfast, but the boy also took a long time and returned with an empty pot. There was no more manna.

Last, she sent her firstborn to catch some quail. The day was coming to an end, when the young man came home with terrible sunburn, and empty-handed.

Without the protection of God’s cloud, the sun had become unbearable.

Alone in the desert, the Kauffman family no longer had Rock water, no manna, no quail.

As she looked at her children burned by the sun during the day and shivering in the cold of the night, seeing her family fainting with hunger and thirst, Mrs. Rebekah had nothing other than her husband’s silence, who put his hand above his forehead and looked into the horizon.

Mrs. Rebekah and the entire Kauffman family had to give in and acknowledge that we really can’t live when we step out from under the cloud of God’s presence.

They disassembled the tent and the pride in their hearts.

They packed their bags in a rush and hurried to find shelter again under the cloud of God.

Let’s learn from this story of the legendary Kauffman family, so that we will always remain under the Cloud of God’s Direction.

But you, go your way till the end; for you shall rest, and will arise to your inheritance at the end of the days. Daniel 12.13

1 thought on “Walking and complaining…”